Breast Cancer Awareness Month: Celebrating the Strength & Survival of One of Our Own

October is Breast Cancer Awareness Month, recognized by many countries throughout the world as a time for raising awareness about the impact of breast cancer. During this time, people share stories of both loss and survival, and we recognize those affected by this disease. Here at Compliant Packaging, we often speak with folks whose treatment was made more comfortable through cannabis products, and we’re honored to play even a small role in making their lives more comfortable. However, our company is even closer to this disease, as one of our own, Bonney Rowley, was diagnosed in 2018.

For many clients of ours, Bonney is a very familiar face. As our most senior account manager here at Compliant Packaging, Bonney plays a vital role on our sales team. What many folks don’t know about Bonney, however, is that years ago she was forced to confront difficult treatments and make painful decisions that few ever have to make. Bonney’s story is powerful and affecting, and while it’s ultimately one of survival and strength, it’s also one of incredible pain, both physical and emotional. We’re proud—and grateful—to have Bonney as part of our team.

Bonney was diagnosed with breast cancer on June 4, 2018. That diagnosis was far from a foregone conclusion, however. Three years prior, Bonney had identified a small lump and decided to reach out to a doctor for a precautionary appointment. Her doctor thought it unlikely to be cancerous, but recommended an ultrasound for greater peace of mind.

For years following that first appointment, Bonney had regular ultrasounds that all turned up the same result: the mass was stable, but she could follow up in six months. But three years after that, another lump appeared on the same breast, and a biopsy revealed it to be cancerous.

“I was lucky that the specialist reading the imaging had decided to err on the side of caution by ordering a biopsy,” said Bonney. “Even a seasoned breast cancer surgeon would not have looked at those images and diagnosed an otherwise healthy 32-year-old woman with cancer.”

A Gauntlet of Treatments and Follow-Ups

From that point on, Bonney’s life was forever altered. Much of her immediate time after the call became a maze of names, numbers, and appointments with various specialists. “I spent the summer of 2018 swept up in a parade of doctors and tests, each more invasive than the last,” said Bonney.

As more information was gleaned about her cancer, Bonney ultimately made the very difficult decision to undergo a double mastectomy to eradicate the cancer from her breast tissue. But even this wasn’t the end. Bonney would also need to undergo chemotherapy, radiation treatment, and hormonal therapies to ensure the complete eradication of cancer from her body. 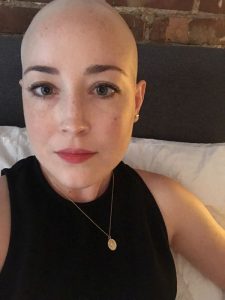 A Personal Stake in the Cannabis Industry

Bonney hasn’t always worked in cannabis packaging. She previously spent nine years in the New York City wine industry, working with some of the top restaurants and sommeliers in the industry. She had a great passion for the industry, and during her tenure developed much of the professionalism, patience, and dedication to her clients that she exhibits in her work at Compliant Packaging today.

Her battle against breast cancer did much more than alter her health, however. As she fought to endure physically and mentally arduous cancer treatments, Bonney found cannabis, which ultimately played a significant role in her journey. Cannabis helped bring her greater comfort and aided her recovery, and this experience drew her into the cannabis industry, where she feels a drive to help others bring their cannabis brands to life.

Celebrating Bonney and All the Survivors in Our Lives Bonney Rowley after her battle with breast cancer.

We’re deeply grateful to have Bonney Rowley as part of our team here at Compliant Packaging! We’re honored to be part of an industry that played even a small role in her story of survival, but even more than that, we’re constantly floored by Bonney’s incredible strength and resolve—both during her treatment years ago and today.

Breast Cancer Awareness Month is an important time to take a step back to recognize survivors, remember those who we have lost, and continue to raise awareness of this disease that impacts the lives of millions each year. Behind all the pink ribbons and calls for strength are deeply personal stories of pain and unthinkable decisions. Thank you, Bonney, for sharing your story with us. We’re glad you’re part of the Compliant family!

Note: Many of the details of Bonney’s diagnosis and treatment have been excerpted from her personal narrative within this article, published in The Fold Mag.